What are Saunas Good for: Health Benefits?

For clearing the pores, relieving aching muscles, and increasing circulation, there’s nothing quite like a relaxing session in a sauna.

The use of saunas as an alternative form of therapy can be traced all the way back to the Mayan sweat houses of 990BC; 3000 years later, they remain as popular as ever. Undoubtedly, saunas do have plenty of health benefits and it’s why it’s recommended by an increasing number of doctors. 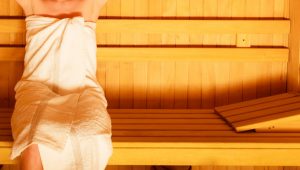 10 Health Benefits of Saunas You should Know

While the type of heat treatments on offer are wide (varying from wood-burning and electrically heated saunas to Infrared rooms), all purport to offer the same fabulously healthy perks. To help you decide if a sauna is for you, we’ve rounded up ten of their most acclaimed and scientifically backed benefits.

According to the scientists behind a report published in Mayo Clinic Proceedings, “sauna bathing may be linked to several health benefits, which include a reduction in the risk of vascular diseases such as high blood pressure, cardiovascular disease, and neuro-cognitive diseases.”

In a similar report published in the European Journal of Preventive Cardiology in 2018, those same scientists concluded that just 30 minutes in a sauna is enough to produce a positive impact on both systolic and diastolic blood pressure.

Considering the benefits of lowered blood pressure extend to reducing the odds of everything from depression, stress, and anxiety to heart attack, kidney failure, renal disease and stroke, this particular health benefit is something we should all be taking note of.

While it may seem slightly hyperbolic to suggest a good sweat session could put years on your life, there’s a growing body of evidence to suggest just that. A 2015 report published in the Jama Network Journals posited that regular sauna use could reduce the occurrence of fatal cardiovascular events and all-cause mortality- a hypothesis that was amply supported by findings that demonstrated a clear correlation between increased sauna use and decreased rates of mortality. During the course of the study, 2,300 Finnish men were monitored for over 20 years.

Compared to the men who had just one sauna a week, the risk of sudden cardiac death (SCD) was 22% lower in those who enjoyed 2-3 sauna sessions a week, and 63% lower for those who sweated it out over 4-7 sessions a week.

For all-cause mortality, sauna bathing 2-3 times a week was linked with a 24% reduced risk compared to just one sauna session per week, and 4-7 times per week with a hefty 40% reduced rate. According to the report, it’s not just the frequency of the bathing sessions that matter- the length of each individual session is almost as important. Sessions lasting upwards of 19 minutes demonstrated the greatest health benefits, with those who indulged in lengthy sessions 52% less likely to suffer sudden cardiac death or fatal cardiovascular disease compared with those who kept their sessions to 11 minutes or less.

We may be living longer than ever, but the ever-prevailing menace of the age-related cognitive disease can sometimes make a long life seem more of a threat than a promise. Fortunately, we may be able to mitigate at least some of the risk with a sauna session.

According to researchers, saunas can not only help short term cognitive function by improving sleep, relaxation, and mood, they can also help decrease the long-term risk for dementia and Alzheimer’s disease. In a report published by Age and Ageing, scientists studied 2,315 Finnish men aged between 42 and 60 over an extended period. Their aim was to establish a correlation between increased sauna use and a decreased occurrence of cognitive decline- a correlation that was amply supported by the report’s findings.

However, we all know correlation doesn’t equal causation, and more evidence might be needed before we replace our brain-enhancing crossword puzzles and turmeric supplements with saunas… although until that evidence is found, it certainly can’t do any harm in supplementing the one with the other.

Those who suffer chronic pain have historically been forced to resort to expensive, and sometimes risky, pain medication. For those who’d prefer to go the natural route, relief may be easier than previously thought.

Investigations into sauna bathing have shown that a 20 minute plus session may help improve the pain and symptoms associated with musculoskeletal disorders such as osteoarthritis, rheumatoid arthritis, and fibromyalgia. While it’s important to note the relief is temporary (there is no suggestion saunas can actually cure such chronic conditions, only that their use can help ease their symptoms), the findings are significant nonetheless.

With the US already in the grip of an opioid crisis (and more countries on the brink of the following suit), anything that can reduce our reliance on dependency-causing drugs should surely be lauded.

So, how exactly do saunas manage to do the same job as costly pharmaceutical concoctions? According to the scientists behind a report into sauna bathing and systematic inflammation for the European Journal of Epidemiology, the magical properties of a sweat-session could be down to its ability to reduce inflammation markers in the blood. When inflammation goes up, serious pain and fatigue can ensue; when it goes down, the opposite happens. Again, no one’s suggesting saunas are a magic bullet, but for those suffering chronic pain, they could be a game-changer.

Whether you have asthma, chronic breathing difficulties, or just a nasty cold, a 20-minute spell in a sauna could do you the world of good.

Studies published by the Mayo Clinic have suggested a positive effect on certain nonvascular conditions, including those previously mentioned. During a small study involving 12 male participants with obstructive pulmonary disease, scientists discovered a transient improvement in lung function with regular sauna use.

Further studies have shown similar results: a trial involving 25 volunteers demonstrated that the incidence of common colds halved in those exposed to sauna treatments, while a separate study concluded that regular sauna baths correlated with a reduced risk of pneumonia.

For those tempted to test out the beneficial effects of saunas on their own lungs, the general advice is to start slowly and work up to longer sessions. Keep your first few sessions between 5 and 10 minutes, 2-3 times a week, and slowly build up to longer, more frequent sessions over the course of several months until you reach the optimal 30-40-minute-long session, 3-4 times (or more) a week. 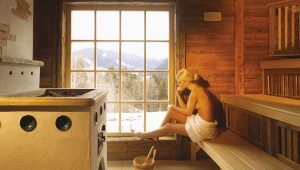 We’ve already read how saunas may help guard against long term, age-related cognitive disorders, but what you may not know is they can also help alleviate short term mental issues like stress and anxiety.

Studies suggest that regular sauna use can help lower levels of cortisol in the body. As cortisol is your body’s main stress hormone, the knock-on effect of this is reduced anxiety and greater resistance to stress. As an added bonus, scientists have also found that saunas are a great way of boosting the production of Brain-derived neurotrophic factor (BDNF).

In layman’s terms, BDNF is a naturally-occurring protein in our brain that helps reduce our risk of mental disease, elevates our mood, and triggers numerous other chemicals that help improve neural health. To put it simply, the more BDNF we have, the happier we are…. if the scientists are right, and saunas can indeed help increase BDNF, adding them to our schedules should be a no brainer.

Insulin has a myriad of responsibilities, chief among them being the task of allowing cells to uptake glucose and convert it into a form that can be used for energy. Insulin is vital to our existence: without it we can’t survive, let alone thrive.

Until the discovery of insulin in the early 1900s by Frederick Banting and Charles Best, death from diabetes was a common occurrence, and even today, the diabolical consequences of insulin resistance and diabetes is a very real and prevalent danger. While medication and diet are conventionally seen as the two main factors in controlling the symptoms and causes of diabetes, reports have suggested that saunas may also have a role to play.

In a controlled study, insulin resistant, diabetic mice were treated to three, 30-minute hyperthermic treatments (i.e. treatments involving the same kind of heat you’ll experience in a sauna) over the course of 12 weeks. At the end of the period, the mice were found to have a 31 percent decrease in insulin, along with a marked reduction in blood sugar levels. If these findings extend to humans, there could be real hope for anyone suffering from Type 2 diabetes and metabolic or insulin resistance syndrome.

While no one’s suggesting half an hour in a sauna can turn a 90lb weakling into a 300lb bodybuilder, there’s some evidence to suggest sauna therapy can help increase net muscle growth.

According to a study on rats, heat therapy significantly reduced the rate of disuse muscle atrophy. The explanation behind the findings is thought to be a large amount of heat shock proteins (HSPs) released by the body during heat treatments such as saunas. The HSPs help prevents muscle atrophy by gobbling up the free radicals that can result in oxidative stress (a major contributor to muscle breakdown).

As an added boon, HSPs can also help protect against rhabdomyolysis, a degenerative muscle tissue condition that’s one of the major side effects of statin use. With more and more of our aging population relying on cholesterol-lowering drugs to control their risk of heart disease, this is one benefit that has some serious, and noteworthy, implications. 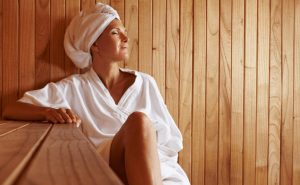 Most athletes know the power of a sauna when it comes to relieving their aching muscles post-workout, but the benefits for fitness fanatics don’t end there.

While HIIT has long been the buzzword for increasing endurance, heat treatment offers many of the same great effects. Saunas are essentially a form of “heat conditioning” (i.e. a way of acclimating yourself to heat). Repeated sauna use induces physical adaptations that make it easier for you to perform when your body temperature is elevated (as happens when you exercise). Those same adaptations include increasing blood plasma volume, improving blood flow to the heart and muscles, and promoting levels of heat shock protein and growth hormones- all of which contribute to improved performance.

During a study into the effects of saunas on endurance, athletes on a regime of twice-weekly, 30-minute sauna sessions managed to increase the time it took them to run to exhaustion by over 30%. If you’re looking for a way to take your workouts to the next level, you may well have found it.

If you suffer oily, acne-prone skin, it may be worth adding a few weekly saunas to your skincare regime. In a study involving 41 volunteers into the potential effects of saunas on skin health, scientists discovered that regular sauna exposure was positively correlated to a decrease in causal skin sebum (the oily substance that can result in an unflatteringly shiny forehead). Other skin benefits uncovered by the study include improved hydration and surface PH.

As saunas have also been credited with improved circulation and an acceleration of the body’s natural mechanism for ridding itself of impurities and toxins, anyone looking to hold back the years with a glowing complexion would be well advised to add a few weekly trips to the sauna to their schedule. 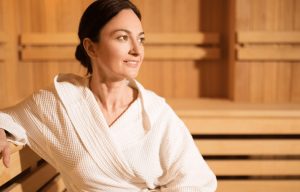 Saunas are by no means a cure-all. That said, their list of purported benefits is long and, unlike a lot of other “alternative” forms of treatments, backed by scientific study.

Limited heat exposure in the controlled environment of a sauna appears to be capable of everything from improving our hearts to healing our lungs, enhancing our endurance, and preventing cognitive decline (to say nothing of giving us that highly desirable, youthful glow). While more evidence may be needed before we embrace saunas as the magic bullet that some enthusiasts claim them to be, there seems nothing to be lost (and potentially a lot to be gained) from adding a few sweat sessions into our weekly schedule. Bring on the coals…